After attempting to read Kant's Critique and the Prolegomena, after banging my head against the wall repeatedly, I figured it was time to break down Kant's terms into something manageable.

First, a few notes from the introduction to the Critique of Pure Reason: Kant is concerned with securing a foundations for science and metaphysics. Being awoken from a dogmatic slumber by Hume, Kant explores the distinction between empirical (sense/experience) knowledge and rational knowledge (logical/known before sense/a priori).

Though Kant believes that we can know much a priori, that logic and rationality can help man make sense of the world (or at least of his own mind...!), he submits all knowledge begins with experience. Our "faculty of knowledge" is awakened by the things in the world around us. (1) Knowledge cannot arise in a subject without sense experience. But this does not mean that all our knowledge arises from experience. Instead, it seems a priori (non-empirical) knowledge is that knowledge that is "independent of all experience and even of all impressions of the senses." (2)

My hope is to develop a thorough, workable map of Kant's view of human understanding. How does man come about knowledge? What steps are taken from sense data to concepts and judgement?


Below are a few of Kant's quotes (indented) with my attempt at commentary/summation/paraphrase, and also the beginnings of a glossary in which the terms themselves are colored red and are followed by quotes and additional attempts at summary in italics. The translation used is Jonathan Bennet's Early Modern Texts.


Knowledge: knowledge is made up out of intuition and concepts (74);

"For us to have knowledge about anything, we need three things to be given to us a priori:
1. the manifold of pure intuition;
2. the imagination’s synthesis of this manifold; and
3. the concepts that give unity to this pure synthesis." (104)

"[...]•apprehending representations as states of the mind in intuition, •reproducing them in imagination, and •recognizing them in a concept. Synthesis: "By ‘synthesis’ in its most general sense I mean the action of assembling different representations and grasping their manifoldness—their variety—in one item of knowledge." (102);

"synthesis in general is a mere effect of the imagination—something that the soul does blindly, usually without our being conscious of it—though it is in- dispensable because without it we wouldn’t know anything" (103);


Sensibility: objects are "given" through this "stem of human knowledge" (29);

"the name of the capacity for acquiring representations that reflect how we are affected by objects" (33);

"our mind’s •receptiveness to getting representations when it is affected somehow, then ‘understanding’ is the right label for the mind’s power to produce representations from itself" (75)


Understanding: objects are "thought" through this "stem of human knowledge" (29);

"I have explained what the understanding is, in several different ways: •an active cognitive faculty (in contrast to the passivity of sensibility), •a power of thought, •a faculty of concepts, •a faculty of judgments. When you look at them carefully, these accounts are all equivalent. ·And now I add yet another·: Understanding is •the faculty of rules." (A 126)

process of getting from empirical sense to understanding: apprehension of experience association / reproduction their recognition (A 124)

Experience: a synthetic combination of intuitions (12);

"What enables us to have •experience—any experience—and •knowledge of its objects is a trio of subjective sources of knowledge— sense, imagination, and self-awareness." (115)

Intuition: building block of experience; In whatever way and by whatever means an item of knowledge may relate to objects, what relates it to them immediately. . . .is intuition (33);
intuition is by definition our ability to be knowingly confronted by individual things (33);
"the aspect of an appearance that relates immediately to the object is called ‘intuition" (A 109)

Concept: "concepts are best thought of as capacities for making" (105)


From Transcendental deduction of the pure concepts of the understanding

In summary, the history of philosophy generally places Kant in the position of synthesizing the views of rationalists--those who believed human understanding used deductive, intuitive logic--and the empiricists--those who believed all human understanding comes from the senses. Kant's move was to argue that the human mind imposes an order (rationalizes) upon the sensory data (empirical data) of the world. The mind does this by ordering the world through the imposition of the 'pure intuitions' of space and time. Once information is so ordered, it can be processed by Kant's quite famous categories of understanding. 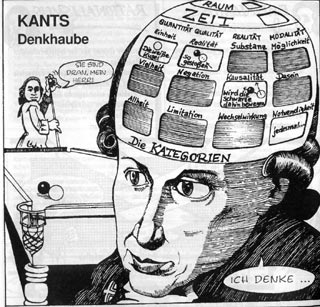 (yeah, it's in German. But the diagram give you an idea of the systematic nature of his categories of quality, quantity, modality, and relation.)


The process is, as the final excerpt form Kant outlines, one of receiving sensory data (a passive sensibility) and one of ordering this data so that it can be used and understood (an active understanding).

This means that humans are blocked off from transcendental (in the traditional sense) knowledge of the world; one cannot know the object as it exists (noumena), but can only know the mind's processed  representation of the object (phenomena).

Next is to systematically outline the exact steps in this process of coming to knowledge. As the Stanford Encyclopedia of Philosophy suggests, part of the problem of simplifying Kant's system of knowledge creation--besides the confusing terminology--is that many of the processes overlap, some are inseparable, and some are only explained in a 'shadowy' way.

And then on to my "real" question, the one that got me on this train: how can Pirsig have an a priori motorcycle?
Posted by James Rigney at 8:45 AM No comments: